AND NATIONAL PARKS IN OSA, PENINSULA DE OSA AND SURROUNDINGS

Several protected areas and national parks established by the government of Costa Rica, facilitate the conservation of the natural resources and wildlife of Osa and surroundings. 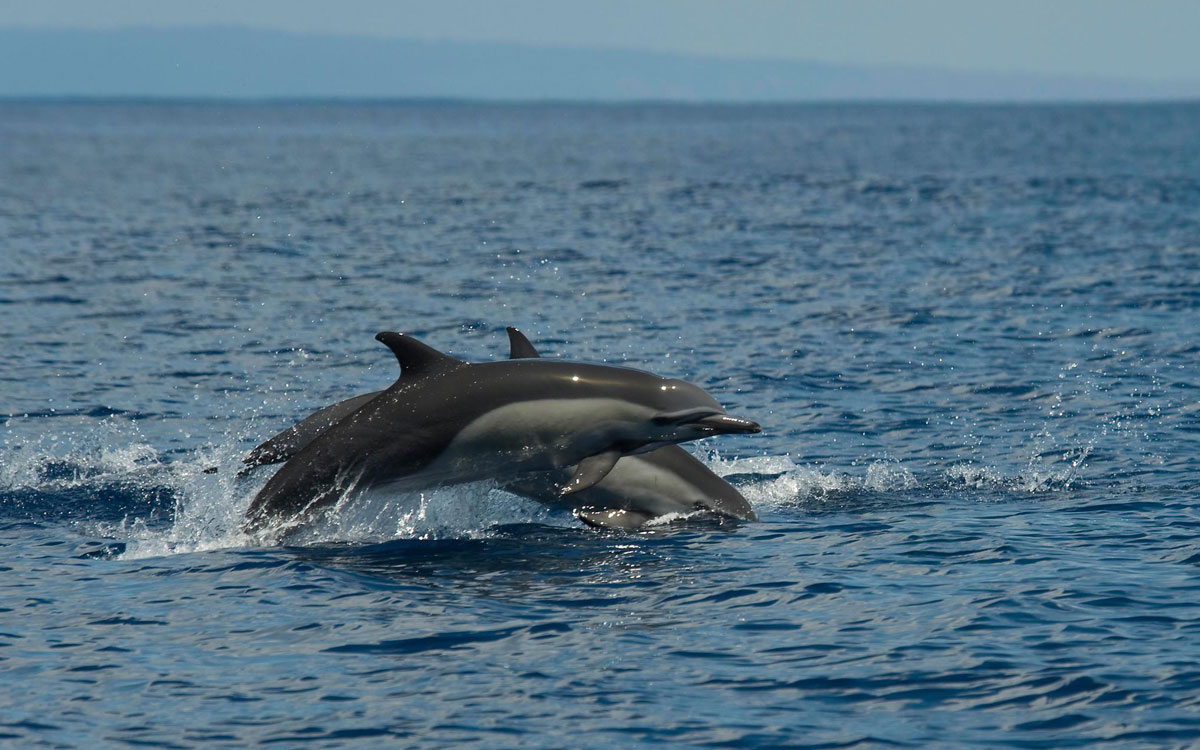 It is located in the districts of Bahía Ballena and Cortés, of Osa; From Punta Uvita (Morete's river mouth) and Punta Piñuela.

The Marino Ballena National Park is framed within a region of great scenic beauty. It protects sandy beaches, stony beaches, cliffs, islands, rocky reefs, coral reefs and the Punta Uvita Tómbolo. The Tómbolo, is a geologic structure, formed by the deposition diverse types of sands, on the ridge of rocks that unite the head of the Tómbolo with the coast. This training is very attractive for researchers and visitors, so in addition to scientific value, it has great value for environmental education and tourism development.

Within the land area of ​​the Park have been reported two species of reptiles: the green iguana and the basilisk. As for species of seabirds we find the Frigates, the White Ibis, the Pelicans and the Bobos Pardos birds.

One of the most important marine environments in the area are coral reefs, which are very sensitive to changes in temperature, exposure and mainly sediment deposition. In the other marine environments that protect the park, the most common species are crabs, lobsters, seaweed, various species of fish, sponges and mollusks such as the cambutes. In its waters are also common dolphins, bottlenose dolphins, stingray, hammerhead shark, parrot fish, mackerel and in seasons the humpback whale.

As a favorite spot for humpback whales and various types of dolphins, this park becomes a natural setting for sightings of these amazing animals. Humpback whales come every year (from July to October) to carry out their breeding cycle; Arriving at the point of the Park where the Tómbolo is located. This curiosity is the main attraction of the place. 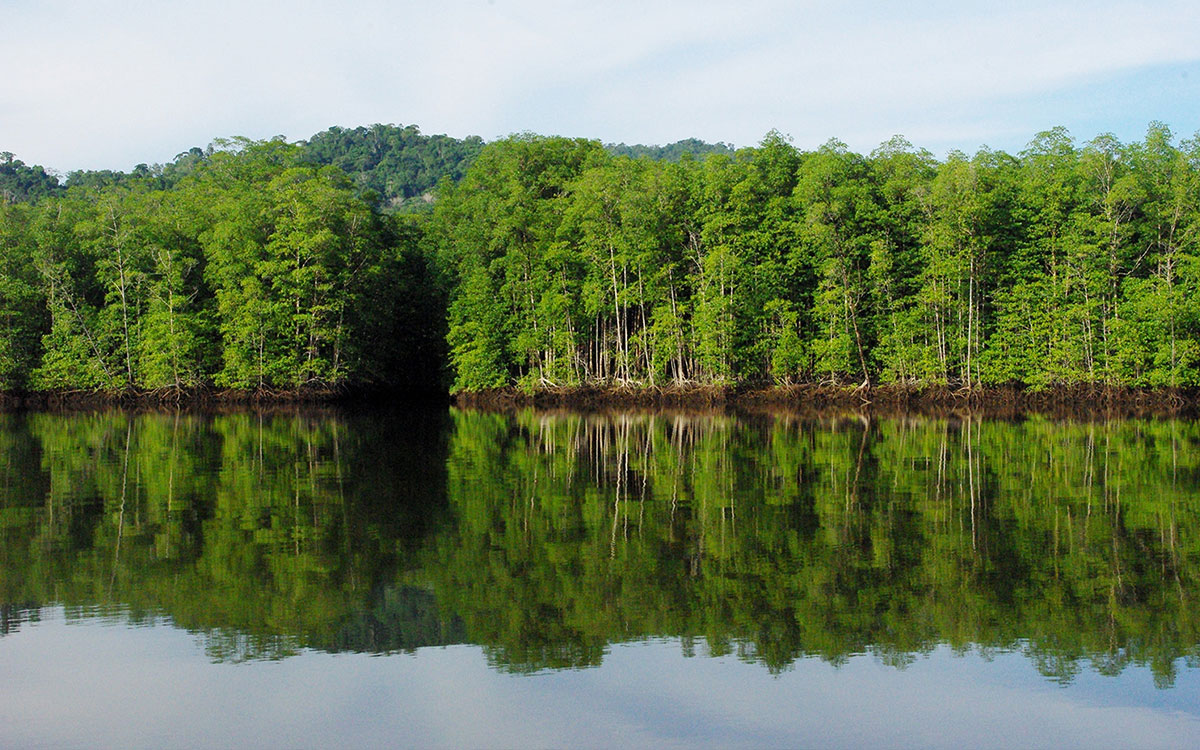 It is located in the districts of Puerto Cortés, Sierpe and Piedras Blancas, in the Canton of Osa. Specifically in the estuary of the Térraba and Sierpe rivers in the South Pacific coast, 270 kilometers from San José. Its climate is tropical and can be accessed by air, land and water.

It is a complex of environments among which are tidal channels, beaches, lagoons, marshes, mangroves and forests. It comprises the largest and most important mangrove forests in Costa Rica.

It has a forest ecosystem, which is flooded by the action of the tides, allowing an adequate supply of sludge, rich in organic matter. In this wetland can be distinguished three types of vegetation: mangrove, palustrina and herbaceous. It also contains various natural and artificial aquatic ecosystems (rice paddies and ponds). The flora is represented by species adapted to this type of environment, where the fresh water of the rivers is combined with the salt water of the sea.

This wetland has become a refuge for wildlife, being the habitat of species of birds (resident and migratory), fish, mollusks, oysters and crustaceans, mammals (in smaller quantity) and reptiles such as are crocodiles and alligators, blue egret, white ibis, osprey, among others.

This area is of great archaeological interest, because in this sector they are spheres of stone of more than two meters of diameter; As well as a variety of pottery and gold objects, representing part of the archaeological wealth of the country. It is abundant the presence of minerals that are in the soil of its mountains and they surround the rivers of this region. The largest gold nugget in the country, was found on Violin Island, located at the mouth of the River Sierpe. 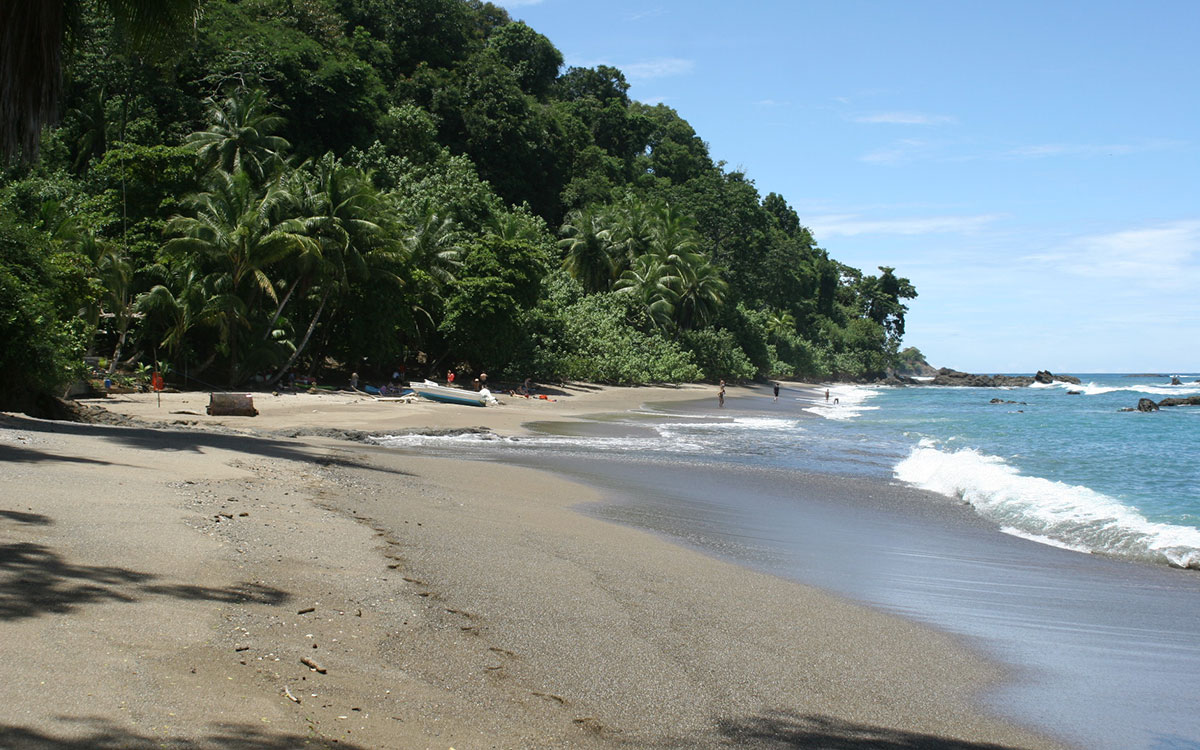 Isla del Caño is a spectacular Costa Rican Marine Biological Reserve, located in the Pacific Ocean, about 20 km off the coast of Drake Bay on the Osa Peninsula.

It is considered of great geographical and archaeological importance, because it was used by pre-Columbian inhabitants as a cemetery and a sacred place. One of the historical evidences of this island are the spheres of stone that were worked by hand of perfect way.

Wild life is limited, consisting mainly of insects such as bees, butterflies and beetles; you can also find amphibians such as Tree Frogs, and reptiles (Lizards and Boas Constrictor), common animals such as opossums and bats, as well as resident bird colonies and Migratory, which fly to warmer climates from the northern hemisphere during the winter.

The island is 110 meters above sea level, is composed mainly of white sand beaches, some of which disappear during high tide. Its waters are some of the most blue of the country and they host a spectacular variety of marine flora and fauna. In addition, it is surrounded by five platforms of coral reefs, product of formations of volcanic rock, which give home to small molluscs, crustaceans and fish.

Isla del Caño has been named as one of the best dive sites in the world. Usually the conditions for diving are excellent, with fantastic visibility under water, so that at any time you can observe sea turtles, dolphins, stingrays, eels, moray eels, barracudas, tunas, grouper, large variety of sharks and Including humpback whales (in times of sighting). But being a biological reserve, diving is regulated and it is not allowed to remove any of the marine life either alive or dead. 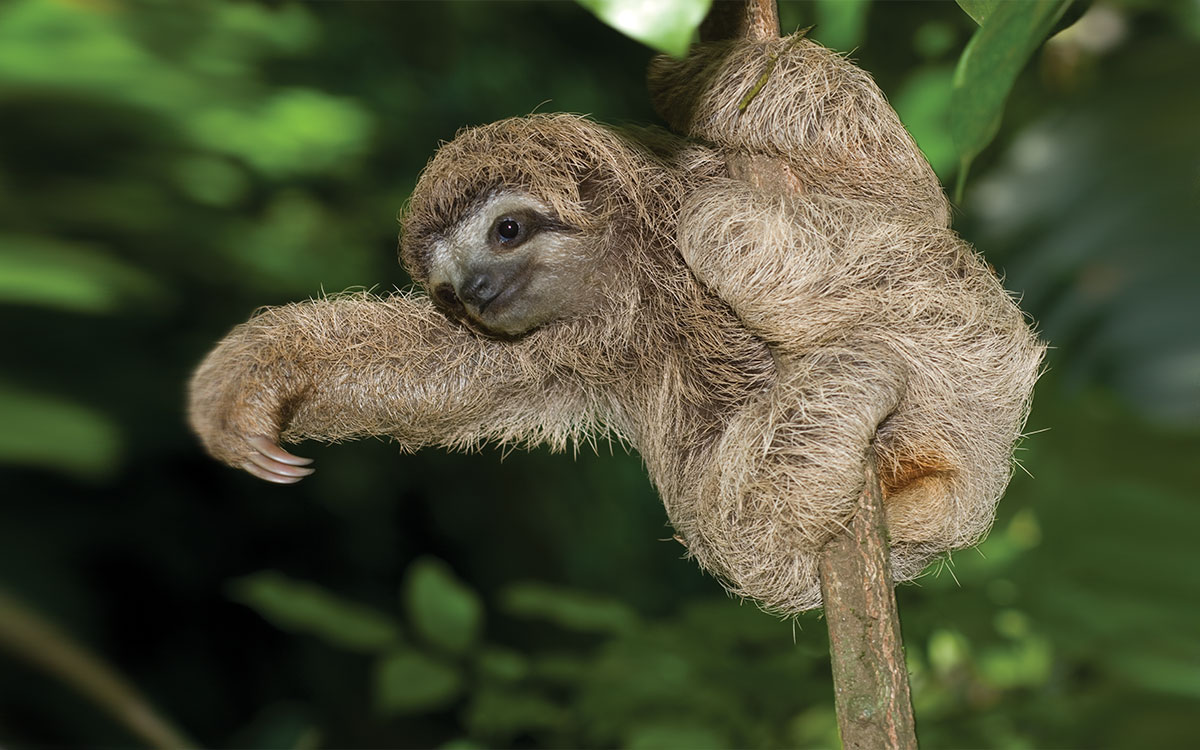 Corcovado National Park, located on the Osa Peninsula, on the southwest coast of the Pacific Ocean, is one of the two most important peninsulas in Costa Rica. The park is the largest protected area in Costa Rica and according to National Geographic is the most biologically active area in the world, one of the most biodiverse places on the planet.

In Corcovado we find a large number of tropical habitats, including primary forest, upland forest, cloud forest, floodplains and marshes. It also has a great diversity of species of trees, important populations of jaguars, anteaters, tapirs, deer, felines, spiders, monkeys and an extravagant variety of birds, freshwater fish, reptiles, amphibians and other tropical animals. There are 2 main trails (one that runs along the coast, and one to the inside) and 4 ranger stations.

Dedicate 2 or 3 days to the visit of the area and the park.

To walk in the park is recommended a good physical condition.

And of course, a lot of precaution. 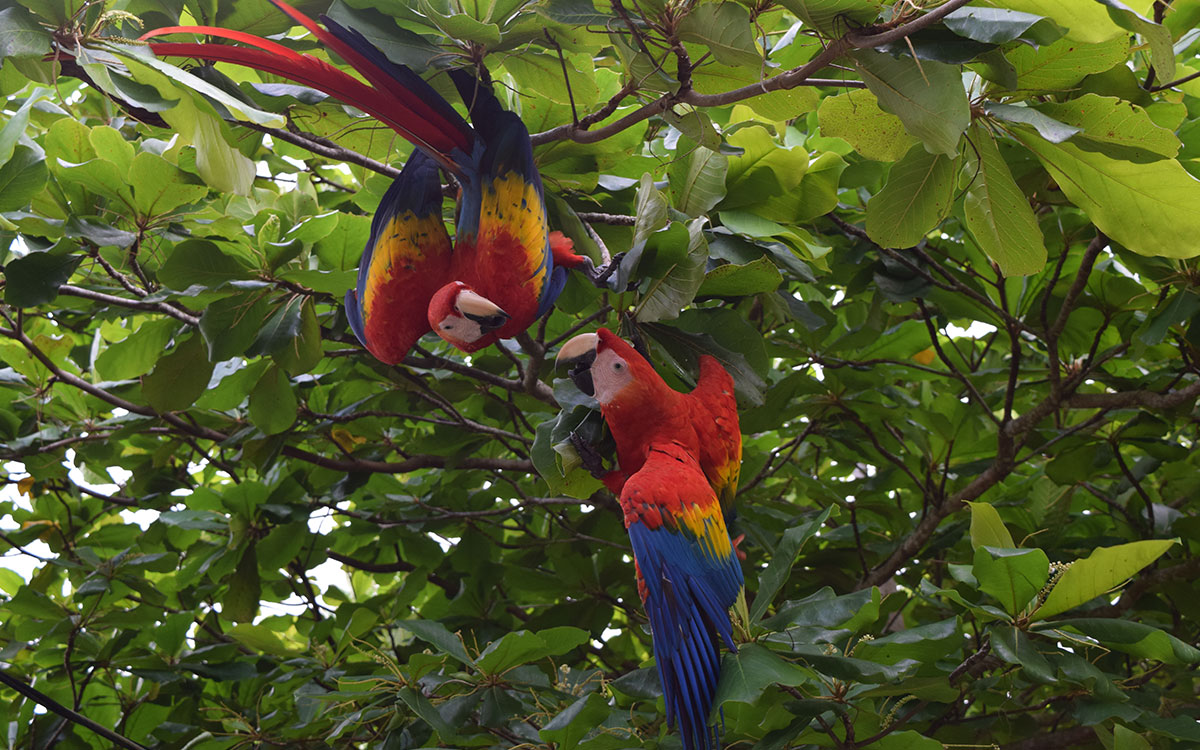 Located in Golfito, southeast of the Osa Peninsula, on the Pacific coast of Costa Rica. It is a neighbor of the National Wildlife Refuge Golfito, and connects with Corcovado National Park to form a biological corridor in Golfo Dulce.

Due to the humidity, rain and hot weather, it stays green all year round, thanks to which it has an amazing diversity of flora and fauna.

Its vegetation is characteristic of the tropical rainforest, composed by trees of up to 50 meters of height like the Ceiba, Nazareno and the Pilón; great variety of mosses and ferns.

The present fauna is very diverse, this national park is one of the places that still the home of the jaguar in Costa Rica, in addition they are tepezcuintle, peccary and caucel tiger. The presence of amphibians is extraordinary, among them poisonous red frogs.

Considered by many the best park in the country to observe the birds, both in the forest and on the shore of the coast. Among those that can find are the scarlet macaw, yigüirros, black turkey, hawks, toucans.

The Piedras Blancas National Park also protects a series of waterfalls and rivers along the winding paths, as well as beaches, coral reefs and bays in the northern Golfo Dulce.

Website dedicated to the promotion of Osa Costa Rica and surroundings. Promoted by the Tourism Chamber of OSA Costa Rica